Schupfnudeln are one of our favorite Christmas Market foods. Turns out these German potato dumplings are pretty easy to make at home too.

Schupfnudeln are hand-rolled dumplings. The dough is made from flour, potatoes, and eggs. They are a simple food really. But everyone knows that sometimes the simplest foods are the best.

Schupfnudeln are a staple German Christmas Market food. Typically, you’ll see these tasty fellas being sautéed in enormous quantities in enormous woks with sauerkraut and speck. And when you’re standing outside in the cold and you want some hearty food to warm your body, heart, and soul there’s no better dish to turn to.

And yet, the version of Schupfnudeln that has stuck with us as one of the best Christmas Market dishes we’ve had was a bit different. A bit special. Fancy if you will. It even had green vegetables which are few and far between at these stalls.

This year, we decided to have a Weinachtsmarkt zuhause and make it. This is the dish that inspired this recipe. It did not disappoint. It’s delicious, even without the festive surroundings.

The Schupfnudeln themselves are the simplest part of this dish. They’re basically the same as gnocchi (if you’re more familiar with that potato dumpling), made from flour, potato, egg, salt. But they also have a little nutmeg because they’re German potato dumplings.

They’re essentially a blank canvas for whatever toppings you want to add. As we mentioned above, the most common iteration of the dish at German Christmas Markets includes speck and sauerkraut.

But our version is not that simple. It is instead topped with arugula, crispy serrano ham (or prosciutto), chopped walnuts, parmesan cheese, crème fraîche, and chives for good measure.

We only really have one tip for making the Schupfnudeln: a light touch. The dough gets a bit sticky and the dumplings are easier to roll and form if you handle them lightly.

Though some recipes call for putting the raw dumplings right into the pan to sauté, we recommend boiling them first. And actually, you can form the dumplings and boil them in advance so dinner will be nice and quick.

Aside from those things, though you’ll want to eat them faster, let them sauté in the pan with butter for enough time to get properly brown (~7 minutes).

< Try another German specialty next: Flammkuchen with white asparagus > 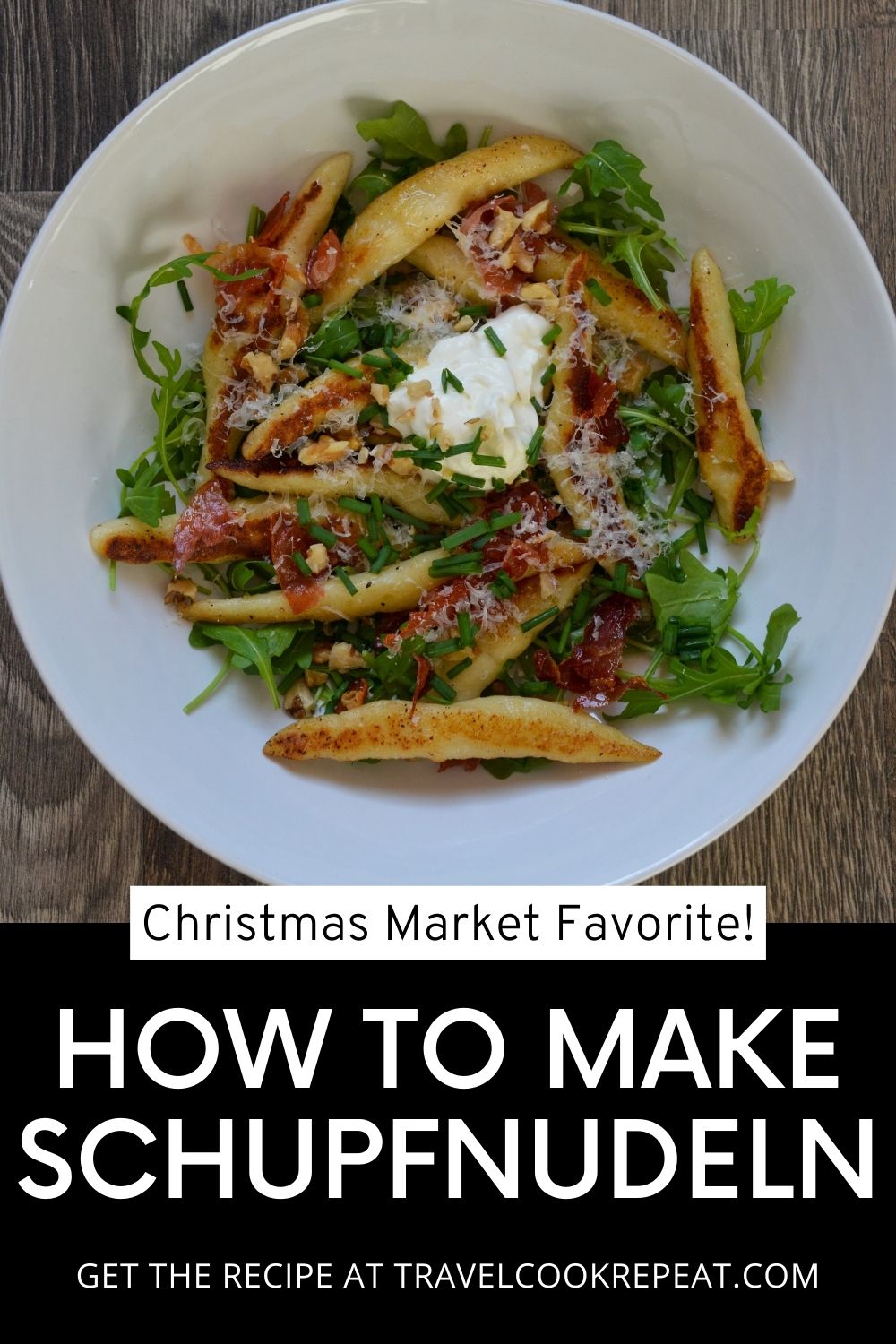