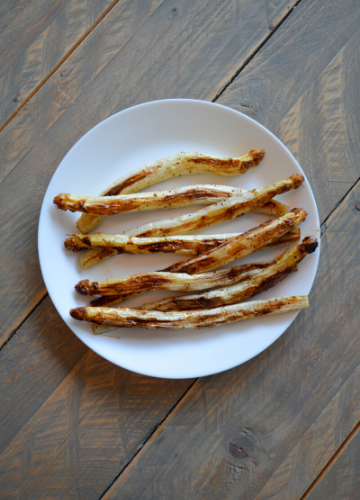 Looking for how to cook white asparagus? Roasting is not the traditional way to prepare the delicacy known as “white gold” – but it’s our favorite. It’s super easy and brings out the sweetness of this near perfect ingredient. Read on our for our simple yet delicious recipe for roasted white asparagus.

Our love affair with white asparagus

We discovered white asparagus in Germany. And rightfully so. When you think of German food, we’re guessing your mind goes to meaty meals like bratwurst or schnitzel or pretzels and potatoes. But a delicate vegetable? Maybe not. But think again.

Spargelstrasse, Spargelzeit, Spargelwein, Spargelhalle, etc. These are all words describing things created around the phenomenon of white asparagus. It *is* German food.

There is a limited season for white asparagus and during that time, it’s eaten in every region in every type of establishment. At fancy restaurants and local pubs there are several course menus dedicated to the ingredient. At the lowest level chain bakeries there are special items during the season. It’s everywhere.

On our travels we quickly learned that Germans go crazy for white asparagus. And so we did too.

When we moved to the Netherlands, we learned that the Dutch also have an affinity with the stuff. It’s nowhere near as popular or ubiquitous, but it’s here. And luckily, during white asparagus season our local market is chock full of the stuff. So we were able to start eating it at home and cooking it the way we like best.

White asparagus is the same plant as green asparagus. It is just farmed a different way. The stalks are kept underground – under piles of dirt – so they are not exposed to light. When they are exposed to light, photosynthesis causes them to turn green.

White asparagus is fleshy and juicy. It really just tastes like pure asparagus. Which is really, really delicious.

The highest quality white asparagus is much thicker than green asparagus. We have bought thinner stalks, and they taste just as good, but they’re not as juicy.

How to cook white asparagus

The traditional way to cook white asparagus in Germany and the Netherlands is to boil it. It’s then served with a sauce such as Hollandaise or breadcrumb butter.

We have enjoyed this dish at many a restaurant, but our preferred method is roasting. Roasted white asparagus have a decadent char that brings out both sweetness and umami.

There is one extremely important tip for how to cook white asparagus, regardless of if you’re boiling, roasting, steaming, or eating it raw…

Before you roast, you must peel. We never peel green asparagus. We just trim the woody ends. But you absolutely, positively must peel white asparagus. And quite a bit. The outer layer is incredibly fibrous and is pretty much inedible.

To peel, hold the spear at its pretty tip. Peel from the thick woody end most of the way up (until you get to the spear part). Go all the way around and double check to make sure you’ve gotten the whole layer off. After you’ve peeled all the spears you can trim about 1 inch off the bottom.

The peeling is the most annoying and time consuming part of this recipe. The rest is very easy and very fast.

First, you coat the asparagus in olive oil and season with salt, pepper, and garlic powder. We like to do this in a smaller, rectangular roasting dish because it makes it easy to shake the spears side-to-side to coat.

Second, lay each asparagus spear on a baking sheet (we like to line ours with foil for easy clean-up). Place each spear at least an inch apart from the next to give them space to breathe and not steam.

If you have a fan/convection setting on your oven, use it (and the shorter cooking time mentioned above).

Serve with a sharp knife because even having peeled them, they can be a touch stringy.

You can serve roasted white asparagus as a vegetable side dish to any dinner. Or you can cut them up to use as a tasty topping like on our Flammkuchen with white asparagus.