Our tavče gravče inspired Macedonian beans recipe is not at all traditional, but entirely delicious. This vegetarian dish is quick and easy to make and will spice up any weeknight dinner.

We discovered tavče gravče (pronounced tavche gravche) in Skopje. It was our favorite of all the Macedonian food we ate, and we ate a lot of it. It’s an incredibly simple dish that packs a whole lot of flavor.

The name translates to “beans cooked in a pan.” The pan in question is an earthenware pot called a tava.

The most traditional beans used in tavče gravče are called tetovo beans. They’re named after the Macedonian city from where they came. They matter to those who are connoisseurs, which is pretty much everyone in the region. If you are lucky enough to find yourself at the Bit Pazar market in Skopje, you’ll see a staggering assortment of these beans. They are all classified and graded and displayed in massive quantities. It was very cool to take it all in, but fairly intimidating to try to shop for.

Traditionally, the dish is made with dried beans and requires extensive soaking and rinsing (and patience).

The other key ingredients that you can find in pretty much any tavče gravče recipe are onion and paprika. Hungary is better known for its paprika, but we were quite impressed with the variety and quality of paprika in Macedonia.

The result is a rich, creamy, smoky baked bean dish that is incredibly satisfying. It is always served with a side of bread, but goes with pretty much anything else you have on the table.

After we returned from our trip to Skopje, tetovo beans in hand (or in suitcase), we did in fact try our hand at making tavče gravče in the (sort of) traditional manner. One key missing piece was the earthenware pot. And this is a very important piece. So even with the proper dried beans, a whole lot of soaking and rinsing, and a long time in the oven, it didn’t hold up. It was good, but not anything close to what we fell in love with in Macedonia.

Even though we failed at making traditional tavče gravče, we knew there was a way we could make it more accessible. We love beans and love experimenting with savory bean recipes.

We had two problems; issue #1: no earthenware pot; issue #2: the rinsing and soaking process wore us out and didn’t make up for the lack of proper cookware.

So here’s what we did.

We gave into canned beans. They are fine. Apologies to the purists, but they are. Beans are meant to be comfort food, and to us that could come from the comfort of cooking something traditional, or preparing it your own easy way.

We use what the Netherlands calls “white beans.” We’re not exactly sure what variety they are, but they’re relatively large white beans and they’re tasty. Great northern beans would work just fine as well.

We cooked the beans in a normal pot on the stovetop. It takes less time, plus it’s easier to control the texture.

We attempted to mimic the earthiness and smokiness that comes from the earthenware pot by adding smoked paprika and tumeric.

To imbue the flavors of traditional tavče gravče into these Maceondian beans, start by sauteing onion and garlic in oil. Once they’re nice and soft, but not burned, you add the spices and let them cook and develop flavor.

Deglaze with some water to make sure all the tasty flavors you’ve developed get into the beans. And then add your drained (we always drain our canned beans!) white beans into the pot along with the rest of your flavorful ingredients.

Even though canned beans are pre-cooked and you could eat them raw if you wanted (they’re great in a salad), the key to getting this dish to taste a bit like tavče gravče is to cook it a while. First we cook them covered, to let things absorb. Then we cook them uncovered to help reduce the liquid away.

The other key step to this recipe is mashing the beans a bit. Now, in traditional tavče gravče, the beans remain whole throughout cooking. But they’re washing and rinsed and soaked and cooked for so long that once they come out of the oven and you scoop a piece of bread into them, they start breaking down immediately.

To get a similar effect with less time and canned beans, just take a spoon and mash them up a bit a few times during cooking. This will also help the beans thicken and keep that flavor in.

Keep an eye on the beans towards the end of the cooking process. If they go too long, they’ll start sticking to the bottom of the pan. A little stickage is okay, but you don’t want all your (not so) hard work to be for naught with burned beans.

You may be tempted to just eat these beans right out of the pot with a spoon. They smell amazing as they cook so we wouldn’t blame you.

Though we didn’t eat tavče gravče with hamburgers in Skopje, we think our Macedonian beans recipe would go great as a side dish to our Balkan Burger.

However, the best way to enjoy these beans is to smother them on some freshly toasted crusty bread. 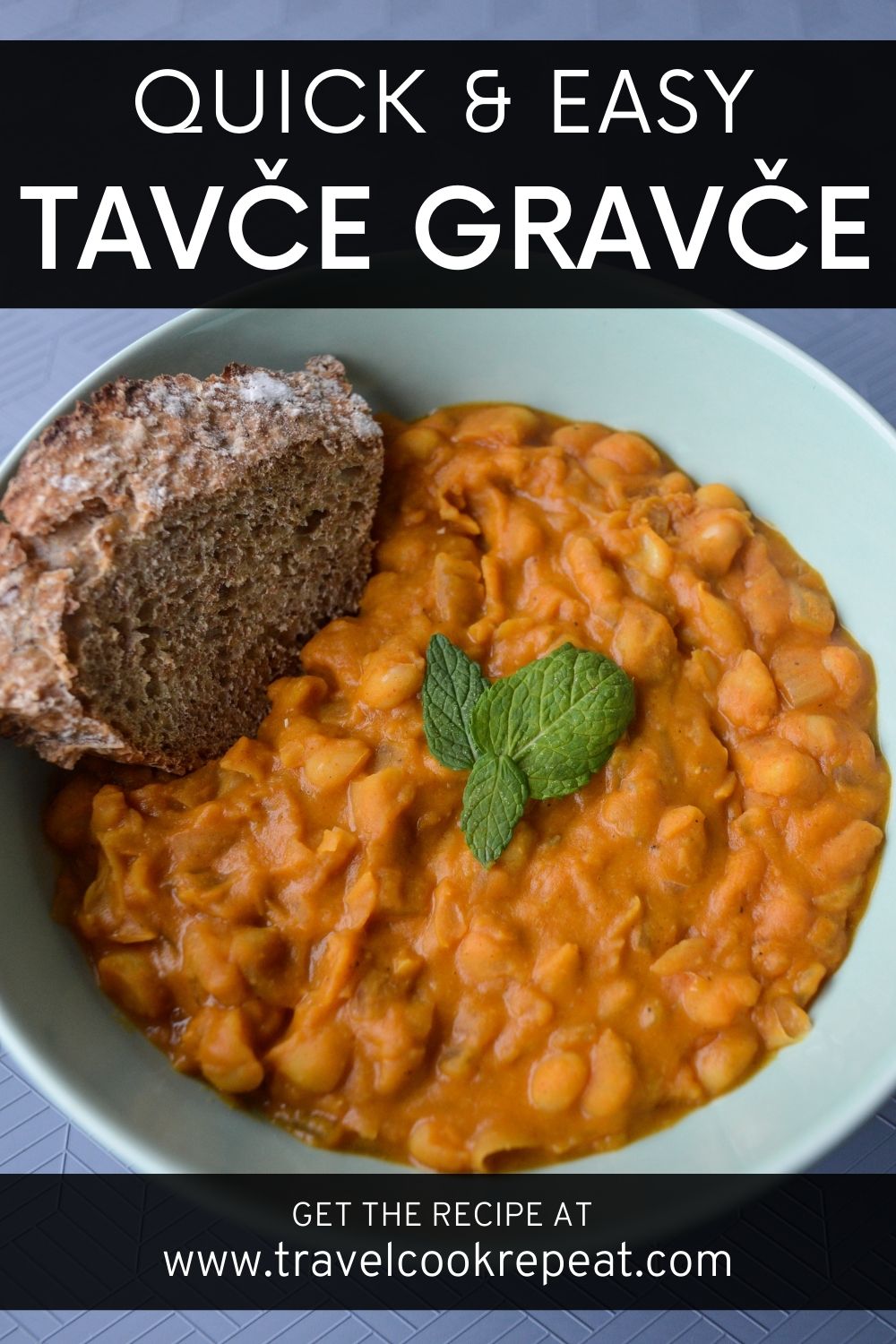